Stanford’s Medicine X conference has just driven by. It was an amazing ride. Tempted to wait before writing for the insights to distill in my mind, but feel the urgency to describe it before the exhaust dissipates.

At the beginning of the conference I tweeted (click image to enlarge): 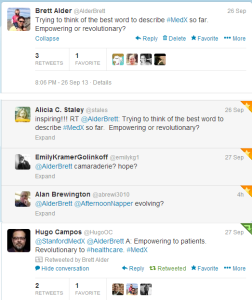 After talking and soaking in so many experiences from fellow MedXers, my main takeaway was “purpose”. It was this eerie feeling that most everyone you spoke with wanted to improve things, just like you. They were not hung up on dogma or politics. They were passionate enough to have educated themselves and could speak articulately on the issues. For me it was like soaking in a hot spring and floating in space — at the same time.

The thing that left the greatest impression on me, and was also a salient illustration of that purpose, was Regina Holliday sitting on a panel and addressing a question from the audience. She blustered at the questioner who was talking about issues in healthcare: “Nothing’s stopping you, if you want change, make it happen! Do it. Do it now!” It was raw. Emphatic.

She paints a tailored story for people for free on the back of sports jackets. I’m trying to imagine how she can process so many different factors and create a representative work of art in so little time. Paintings with embedded brilliance and poetry. Members form a group called the Walking Gallery (click image to enlarge): 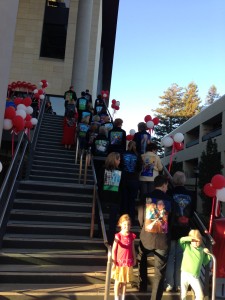 Medicine X had some of the most brilliant people from around the planet, all with a common purpose. The thought that came to mind watching Regina was a curiosity to know if she had a manifesto to match her enthusiasm, brilliance and artistry. Liza Bernstein talked about the indignity of Apartheid and shared a quote from Nelson Mandela. Mind flashes to the U.S. Civil Rights movement.

You see, African American civil rights leaders marched — they boycotted discriminatory bus systems, they sat in restaurants where they were prohibited — but that’s not all. They stood for something. We all know exactly what that something was. Everyone should enjoy the same rights regardless of skin color. Separate was not equal. Police in Alabama could spray water canons and release the dogs. People watching on TV were appalled by the violence, but we often see violence on TV. Individuals could be silenced and maimed, even assassinated. But there was no stopping the idea.

What is the ePatient idea? Let patients help? Give us our damn data? Patients rights? What would Martin Luther King Junior say if he were an ePatient today? What would Lincoln say? I’m not exactly sure, but I’ll be giving it some thought in the coming weeks. In the meantime Regina will be haunting me. “Do it! Do it now!”

What a great experience.

HT to Susannah Fox for the use of the term “exhaust”.

Susannah Fox posed an excellent question during a recent Master Class on participatory medicine at Medicine X that went something like this:

How do we adapt to a shifting landscape of polling where people expect a more participatory approach?

The translation is, “How do we connect with young people that increasingly have more control over who calls them and do not see an apparent need to participate in polling research.”

In my humble opinion, Millennials have often been poorly characterized. Employers read that they were given a lot of trophies as kids and expect a lot of feedback and praise. I believe the truth is a lot more textured than that.

I would argue that Millennials (young adults born after about 1982) are a Frontier Generation. What does that mean?

A frontier is an untamed and unsettled world. A Frontier Generation is the first group of people to arrive on the scene. The U.S. western frontier may have closed in 1890, but the virtual frontier of the Internet opened in the 1980’s and Millennials are the first to be online for most of their lives.

Being the first to arrive on a frontier means that there is almost no distance between “what you want to do” and “doing it”. If you see a problem, you band together to find a solution. If MySpace isn’t meeting your needs, you create your own alternative (Facebook) and people are free to flock to it. Who settled the Facebook Frontier? Millennials. They have imprinted on a virtual world that seems to always get better, is filled with innumerable choices, and where they are constantly in the driver seat.

At the opposite end would be Establishment Generations. They grow up in a world where things are orderly, and have not largely been disrupted for quite some time. They learn in their youth that it is futile to try to change things, not just because it’s really hard, but because it will make life worse for you. People will think that you’re crazy for challenging an establishment that –most people are convinced — was set up for the betterment of society.

The most long lived Establishment society I’ve encountered is Japan. They have many, many cultural rules and norms that have been fostered for thousands of years. The frontiers of Japan have been closed for centuries. Interestingly, while other ancient countries have seen massive disruptions (being colonized, fighting for independence, etc.), Japan’s history is far more static. They’ve largely always been independent (people could argue they lost that after WWII, I would respectfully disagree). The difference is amazing. One example is the way they park in Japan:

Notice how all the cars in a row face the same direction. Notice how each car is neatly parked within its lines, anyone who’s been to Japan can relate to this. Now behold American parking:

If you want to connect with young people, it helps to understand their world.

Expectations of the World:
Frontier Generation: Changeable, engaging, with transparent exchange (i.e. What value do you want, and what do you offer in return?).
Establishment Generation: Emphasizes peace and stability, one-way, opaque (e.g. “fill out this form and don’t ask why — it’s for the greater good.”).

“We witnessed our politicians and countrymen send us to war on a surge of emotion and quickly forget about us for nearly a decade.”  ~ Former Cpl. Jack Mandaville

To test to see if Mr. Mandaville is correct, I’ve posed this question to people who complain about the wars in Iraq and Afghanistan: “Do you really care?”  Most of the time the answer is, “Well, yes!”  I then ask them, “When was the last time you wrote your Congressperson or joined in a street protest against the wars?”  The answer to that is always, “Never.”  I’m not blaming them, I’m in the same boat.

This is a dangerous place to be in.  Libertarians rightfully argue against military interventionism, but so often the answer is just to “stop doing it.”  But we can’t stop military activity altogether.  So the question is, “What are the rational military needs of a nation?”  We need to be able to defend ourselves and strike enemies when necessary, but we need to refrain from striking when it is not necessary.  How do you find such a balance?

As is almost always the case, the answer lies in equality.  The problem we have today is that the people deciding to send troops into Iraq and keep them there are not at all at risk.  This means you get the very predictable behavior where a majority votes in favor of benefits for themselves (real or perceived) where the cost is solely born by a minority.  In this case the role of underrepresented minority is played by our servicemen and women.

What is the difference between Iraq and Vietnam?  The culture war tradition handed down to us from previous generations has two main accounts of Vietnam.  One telling is that it was a matter of cowardly draft dodgers vs. patriotic Americans willing to fight against the encroachment of Communism.  The other telling is that it involved principled peace loving protesters against an unnecessary conflict vs. blood thirsty napalming soldiers.

So often the debate today surrounding Vietnam is whether or not the U.S. should have stayed or whether or not the war was really won.  The amazing thing we should be highlighting is how vigorous the public debate was during that period.  We did not “send them to war on a surge of emotion and forget about them.”  Why is that?

The truth is that people protested the Vietnam war so vigorously because they were personally at risk.  Everyone had a vested interest.  If it wasn’t you, it was your boyfriend, son, or cousin.  Things were set up differently because most all young people were more equally at risk of being drafted.  Now that we’ve done away with the draft, the vast majority of Americans have no personal stake in Iraq or Afghanistan.  They will not pay more in taxes and there is zero likelihood that they will be sent overseas to fight.  People may have strong opinions, but the truth is as Mandaville has said, we have forgotten them.

How do we maintain a balanced approach toward war — fighting when only necessary?  By having a system in place where if society wants a war, society will bear the costs as equally as possible.  That should be measure of a necessary and just war.  That is when people ask more forcefully, “What do we hope to accomplish?” and “How long will the engagement last and how much will it cost?”  Let’s give equality a chance.